ABSTRACT. The William B. Hartsfield Atlanta International Airport (ATL) is the world’s busiest airport handling some 80 million passengers annually and serves major international and domestic markets around the globe. The airfield itself consists of roughly 4,200,000 sq m (5,000,000 sq yds) of pavement and includes 4 parallel runways measuring from 2,740 to 3,620 m (9,000 to 11,889 ft) long.

Runway 9R-27L was initially constructed over 27 years ago and has been in service  well beyond its design life. Due to pavement deterioration accelerated by alkali-silica reactivity (ASR) and other distress, the owner decided to remove Runway 9R-27L in late 1999 under a fast-track 36 day schedule. A joint venture of major contractors bid $ 52 million to complete the project under this fast track approach. A conventional approach was estimated to cost between $ 15 and $ 20 million without factoring the impact of a closed runway at some $ 475,000 per day over a normal 6 month construction timeframe.

The William B. Hartsfield Atlanta International Airport (ATL) is the world’s busiest airport handling over 80 million passengers annually and serves major international and domestic markets around the globe. ATL, owned by the City of Atlanta, is located on 1,518 ha (3,750 ac) located some 16 km (10 mi) south of downtown Atlanta. ATL is home to the largest airline hubbing operations in the world, Delta Air Lines, and its Central Passenger Terminal Complex (CPTC) is situated on 53 ha (130 ac) with approximately 529,500 sq m (5.7 million sq ft) of facilities including 6 concourses with 168 gates served by a central, underground airport people mover system and pedestrian mall. Currently, some 34 passenger airlines and 23 all-cargo airlines serve HAIA. The airfield itself consists of roughly 4,200,000 sq m (5,000,000 sq yds) of pavement and includes 4 parallel runways measuring from 2,740 to 3,620 m (9,000 to 11,889 ft) long. These east/west runways handle over 2,000 daily takeoffs and landings.

ATL has begun an intensive Capital Improvements Program totaling some $ 5.4 billion over the next 10 years. This CIP includes 4 major components: 1) a fifth runway; 2) an International Terminal; 3) a Consolidated Rental Car Facility; and, 4) a South Terminal.

Throughout the 1980s and well into the 1990s, several pavement evaluation studies were conducted to look more closely at the performance of ATL airfield pavements and address concerns about their structural condition, pavement surface distress, concrete characteristic strengths, and age.

An exhaustive pavement evaluation program was performed in 1997 due to concerns about the relative age of some of the runways. The 1997 study employed several investigative techniques, including:

Results of the 1997 study indicated the Pavement Condition Index (PCI) of the runways ranged from 53 to 97 with most values in excess of 70. The predominate distress observed was widespread map cracking in each of the runways. In Runway 9R-27L in particular, the joint distress was manifested into localized spall features which were increasing at an accelerating rate, as illustrated in Figure 1. It was noted that while the overall condition of Runway 8R-26L would appear lower than that of Runway 9R-27L, the results of PCI data indicate that 9R-27L was deteriorating at a faster rate than Runway 8R-26L, particularly with respect to the pavement keel or center section. Table 1 summarizes 1997 PCI Data for all ATL runways.

The 1997 pavement evaluation study concluded that a pavement exhibiting a PCI value below 70 would require significant maintenance and one below 50 would require major rehabilitation or replacement. 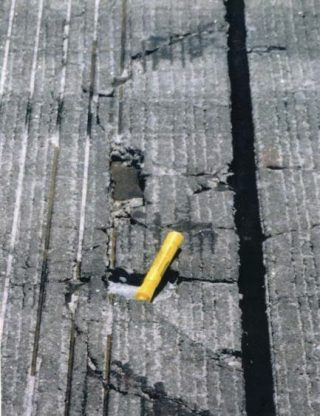 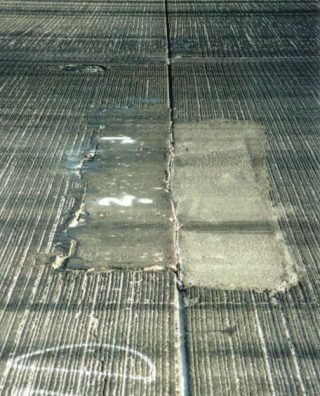 Amongst growing concerns about the condition of Runway 9R-27L, a pavement evaluation study was again performed utilizing a heavy weight deflectometer (HWD) in lieu of the FWD. Results of the 1999 study indicated PCI values ranging from 25 to 79 with the center or keel portions of the runway again exhibiting significantly lower values. 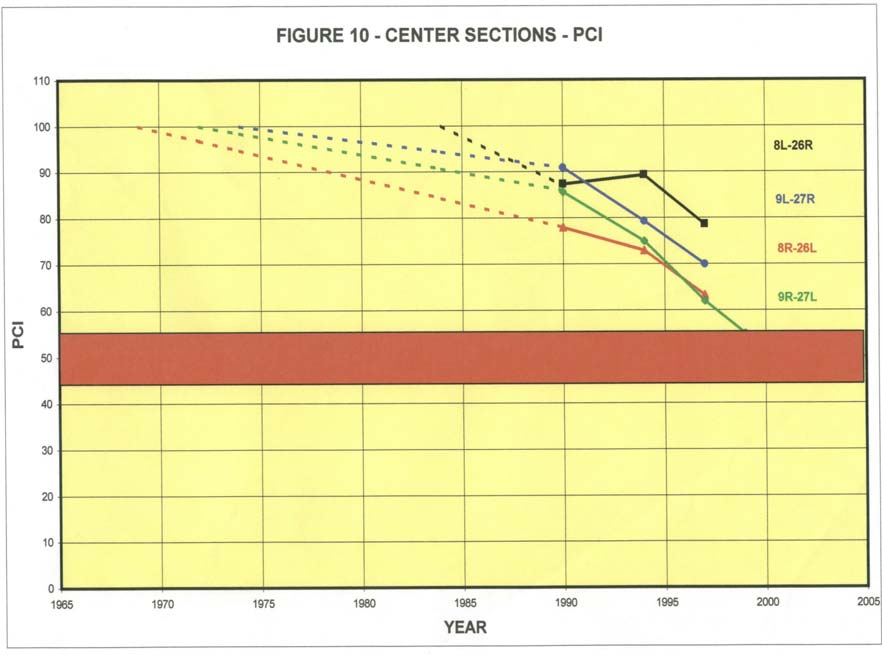 During both the 1997 Pavement Evaluation and 1999 PCI Survey, evidence of alkali- silica reactivity (ASR) was observed in concrete cores from all 4 runways, as illustrated in Figure 3. The reactions appeared most severe in Runways 9R-27L and 8R-26L.  Voids in the concrete matrix in these runways appeared nearly filled with the gel  product of ASR. Furthermore, horizontal cracks within the top 15 cm (6 in.) were observed in cores from Runway 9R-27L. The spalling and surface cracks observed in Runway 9R-27L were load-associated and eth distress appeared to have been accelerated as a result of ASR. It was further noted that the ASR appeared worse in concrete pavement using Portland cement and less severe in concrete using slag cement.

Together, these observations in Runway 9R-27L indicated ASR had in fact contributed to the deterioration of the concrete pavement to a point where replacement of the  runway was considered necessary. 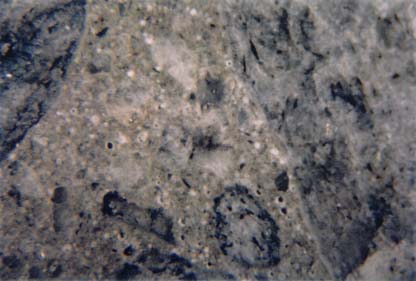 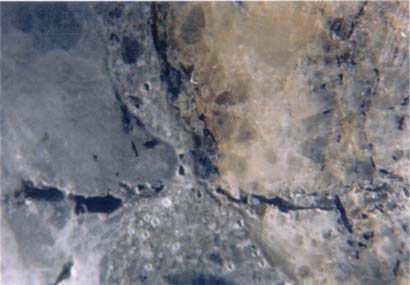 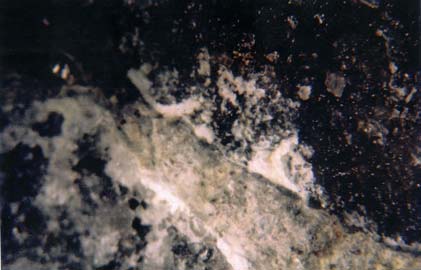 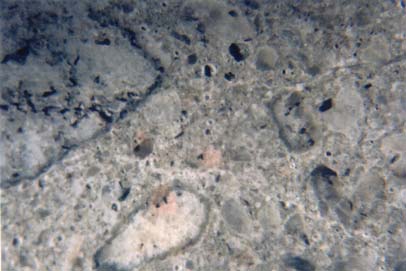 While replacement of Runway 9R-27L was conceptualized in early 1998, a typical reconstruction schedule of some 6 to 7 months was not acceptable because the runway handled one-fourth of the daily flight operations and was also only one of two CATIIIB certified runways that provided pilots with the best landing capability in severe weather. The project designer, Aviation Consulting Engineers, Inc. (ACE) in association with the Department of Aviation is credited with the planning, design, and construction management of the Runway 9R-27L Reconstruction Program. An unprecedented planning effort began over 18 months in advance of construction and included close coordination and consultation with the City of Atlanta, major airlines, and FAA.  A  joint venture of major contractors included APAC Ballenger, C.W. Matthews Contracting, Swing Construction, and Mitchell Construction. Together, this team was selected to remove and replace the 2,740-m by 46-m (9,000-ft by 150-ft) wide Runway 9R-27L, over 167,000 sq m (200,000 sq yd) of 400- to 560-mm (16- to 22-in.) thick concrete pavement in only 36 days.

During this period, normal operations would be transferred to Taxiway R, just south of Runway 9R-27L, that was readied to serve as a temporary runway during this period. This fast-track alternative approach was bid at $ 52 million. A conventional approach was estimated to cost between $ 15 to $ 20 million, without factoring the impact of a closed runway at some $ 475,000 per day over a normal 6 month construction time frame. So actually, the fast-track bid was significantly less expensive to the owner. Because time was so critical, penalties for not meeting the construction schedule ran as high as $ 200 per minute.

A critical phase of the construction project was the removal of some 21,150 concrete panels, each measuring 2.3 m by 3.7 m (7.5 ft by 12 ft) by 406 mm to 559 mm (16 to 22 in.) thick. A specialty contractor, Penhall Company, was chosen for this task based on their experience in California with removal of earthquake-damaged bridges and interstates following major California earthquakes. Penhall mobilized multiple teams of operators and equipment from across the country to complete the task. Once the  existing concrete slabs were cut, unique pavement removal buckets were utilized to carry away a maximum of three 9,150-kg (20,150-lb) panels onto each flat bed truck for transport to a 5.7-ha (14-ac) stockpile yard accommodating some 1,900,000 kN (213,000 tons) of panels stacked on top of one another, sometimes as high as 13 panels (refer to Figure 4). 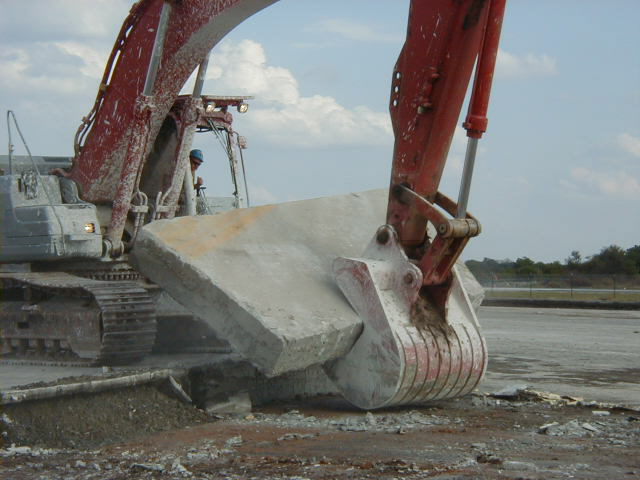 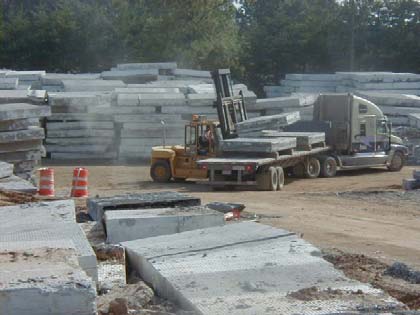 The newly-constructed runway was designed to have an average thickness of 46 cm (18 in.) and a design life cycle of well over 20 years.

The resource needs for this project were significant, including: I) 1,200+ workers working 24 hours per day, 7 days per week at the height of construction ; 2) 200 to 300 truck loads of materials per day; iii) three on-site concrete batch plants (refer to Figure 5), plus an existing off-site commercial batch plant as backup, each capable of  producing as much as 7.7 cu m (10 cu yds) per min.

Phase I operations for the project focused on a temporary modification of an adjacent taxiway which would serve as a replacement runway during construction. This phase lasted 70 days and included procurement and mobilization. Phase II comprised the actual runway reconstruction for a planned 36 day timeframe. Phase III was scheduled for 30 days to convert the temporary runway back to a taxiway, to remove runway lighting and install taxiway lighting, convert runway striping to taxiway markings, and remove temporary exits. 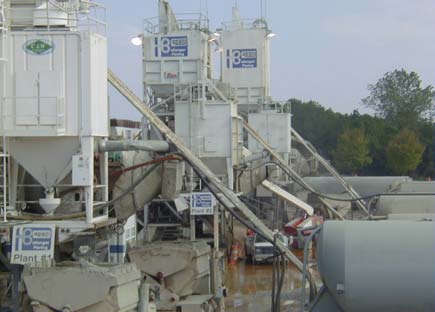 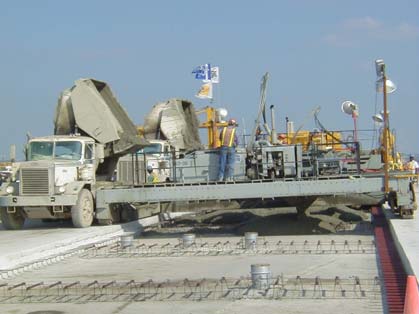 Figure 5  Batching and Placement of Concrete

Results of the strength testing for flexural strength on beams indicated that the ultimate 28-day target compressive strength of 4,480 kPa (650 psi) was generally achieved between 3 days and 7 days.

The authors acknowledge the cooperation of the entire design and construction team which was essential to the success of the 9R-27L Reconstruction project. Planning, design, and construction management were performed by Aviation Consulting Engineers, Inc. (ACE) in association with the Department of Aviation on behalf of the owner, City of Atlanta. A plaque was placed on the completed runway project to recognize and honor Mr. Frank Hayes with ACE for over 25 years of engineering service at ATL.

The construction team was led by a joint venture of 4 firms, including APAC Ballenger,